I always enjoy learning what inspires a quilter to make a particular quilt. The majority of the entry cards for the quilts accepted to the International Quilt Festival show in Houston state the quilter’s inspiration.

This is “Blue Work,” made by L. Klara Geleneserne of Budapest, Hungary. She was inspired by American Red Work designs and made this quilt in blue and white to give it Hungarian relevance. The design of the blocks themselves are based on the lino and woodcut art of Karoly Kos and Gusztav Cseh. The Hungarian portion of the show, “Hungarian Blue-Dyed Quilts” consisted of 15 gorgeous quilts, the majority of which could not be photographed. 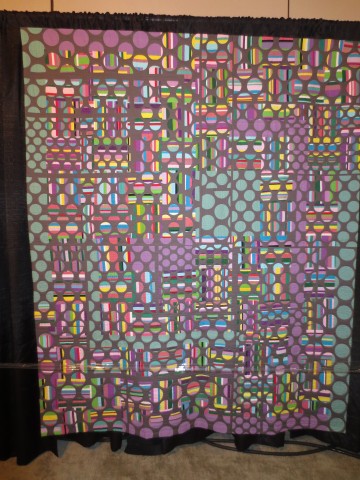 This quilt, called “Temptation of Stripes,” by Keiko Ohno of Chiba, Japan used a large, solid grey/brown sheet of felt which had (perfect) circles cut out of it. The felt sheet was then placed over the top of strip-pieced blocks which peek through the circles. An interesting and original technique.

“Toward the Sea: Ready, Set, Go!”, made by Hiromi Tanaka of Osaka, Japan was inspired by sea turtles and their newly hatched babies, struggling to get into the sea on Yakushima Island. This quilt won a design prize in the International Quilt Week show in Yokohama, Japan. 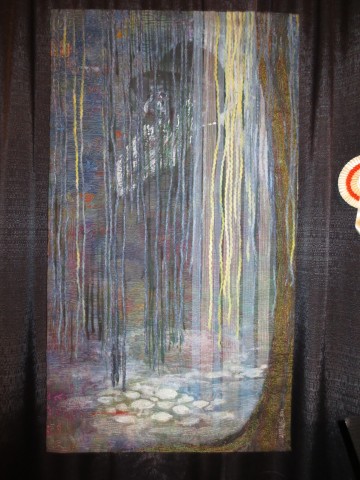 This very unusual quilt, “Hommage a Monet,” was made by Hilde van Schaardenburg of Hilversum, The Netherlands. It is, of course, a tribute to artist Claude Monet, as the name suggests. This quilt won the Judges’ Choice Award in the Open European Quilt Championship. The quilting, which provides the muted background colors and shapes, was stunning. 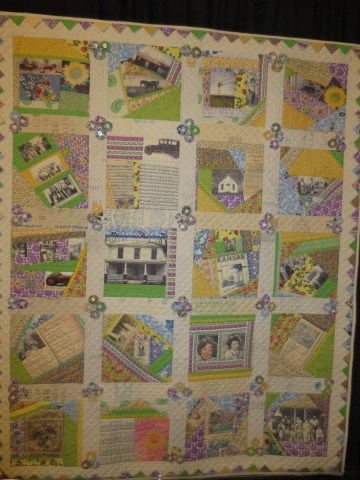 There were so many colorful quilts hanging around this one, I almost walked by it without stopping, but I am glad I did. This quilt hung in the Festival Gallery of Art which had the theme “Childhood Memories.” This quilt was made by Sue Galleon of Steamboat Springs, Colorado. Sue was the youngest of nine children, raised during the Depression on a dairy and wheat farm. The photos are transfers from her family photographs and the fabrics used are from her childhood dresses, made by her mother from grain and flour sacks. Her older sisters curled her hair to make her look like Shirley Temple, and I have to say there is an uncanny likeness in the photos. While this quilt is not a technical knockout like so many of the others, it had a very sweet story. 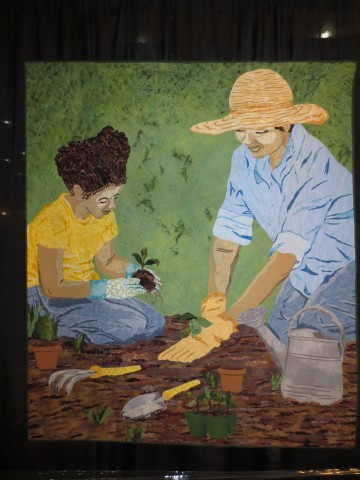 This sweet quilt also hung in the “Childhood Memories” gallery. It is called “Mommy and Me,” and was made by Pauline Barrett of Killeen, Texas. It was inspired by memories of gardening with her mother.

I love this quilt. The colors are fabulous. This is “Blue Lagoon” by Marianne Williamson of Miami, Florida.

This quilt is inspired by a ride in a glass-bottomed boat in the ocean. When you step back from it you can see the fish, coral, rocks, water and sunlight. The quilting was mostly circular shapes, which helped give the quilt depth and emphasized the underwater shapes. 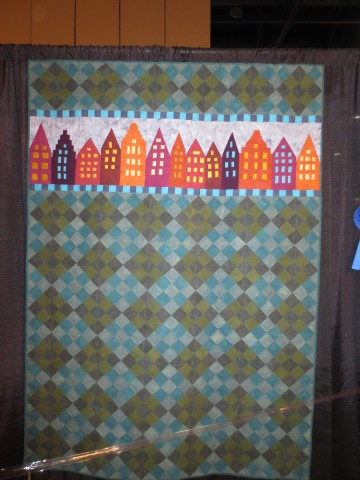 The last quilt for today was made by Claudia Scheja of Werne, Germany. It is called “Kleine Stadtim Munsterland,” and was inspired by the house quilts made by Bernadette Maye. This quilt won second place in the Open European Quilt Championships. I love the playfulness of the houses against the strong traditional nine patch blocks.

The quilts in today’s post are subtle in color and design, with the exception of “Blue Lagoon.” My next posts will be moving on to the more modern and colorful galleries.