Several months ago I submitted two blocks to the Mod Con Block Challenge. The Challenge was to design a block using solid fabrics, using only the colors in the Modern Quilt Guild logo. The blocks are being collected and vetted by Elizabeth Hartman. She will choose 20 blocks that will be used to create a quilt that will be featured at Mod Con (The Modern Quilting Guild’s annual show) in February in Austin, Texas. 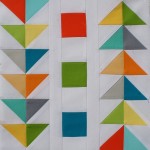 This is the first of my blocks, and it was featured yesterday on www.themodernquiltguild.com. 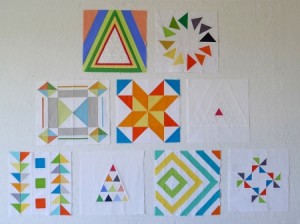 These are blocks that were submitted that use triangles as the theme.

There have been 350 blocks submitted and those that don’t make it into the feature quilt will be sewn into quilts that will be given to the Austin Children’s Shelter. Every block will be used, so everyone wins!