I have finished up more bee blocks and wanted to share the photos.

The first two blocks are for Cindy in Eugene, Oregon. Cindy sent us two 10″ squares of beach-sand colored fabric and asked for beach/sea themed blocks. 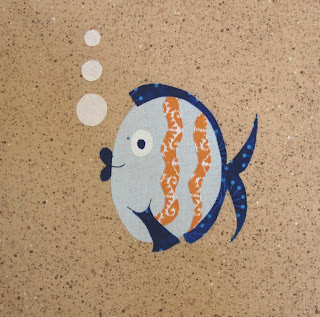 A fish, of course… 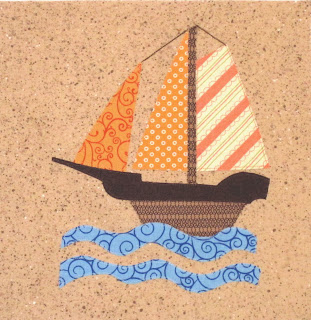 …and another member of the bee had made her a darling appliqued lighthouse, so I made a boat to go with it.

Next, came a package from Lisa in Chicago. Lisa had a very creative idea for her quilt. She asked that each of us make a block representing where we live. Lisa’s starter block was the Chicago skyline done in machine applique. She has received some wonderful blocks in this bee and the quilt is sure to be beautiful. This is mine: 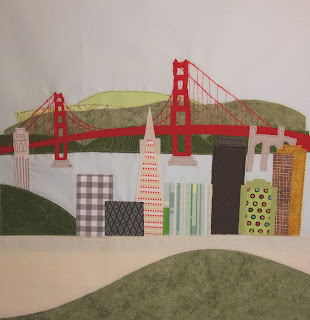 The block represents San Francisco landmarks (from left to right): the Golden Gate Bridge, Coit Tower, Nob Hill apartments, the Marriott Hotel, the TransAmerica Pyramid, the Museum of Modern Art, the Bank of America tower, the Pacific Stock Exchange and the Embarcadero Center. The sun lit hills of Marin County in the background?, and the Oakland Hills in the foreground.
This block was fun to make, particularly finding fabric in my stash that had an architectural feel. It was not fun cutting out and sewing the teeny tiny pieces for the bridge towers. The tower on the left is a little wonky at the top, but the piece of fabric was so small, the needle of the machine distorted the threads of the fabric.
It is finished and in the mail for its next stop in Southern California.
For the moment, I have no other bee projects so I am hoping to jump back into the Farmer’s Wife Quilt Along which I have completely ignored for two months.
Thanks so much for reading along, and hope all is well with you and your families.
Until next time,
Joan

2 thoughts on “More Catching Up”