I did some catch-up this week on two projects that have been sitting on the work table. The first is the April block for Aurifil’s Designer Block of the Month. This month’s designer is Katy Jones. If you are active on Flickr, you know Katy as I’m a Ginger Monkey, and her blog is www.iamagingermonkey.blogspot.com. In this Block of the Month, the designers are required to make a block inspired by a rock music song. Katy’s block is inspired by the song “Heart and Soul” by the 80’s British rock band T’Pau. This is my rendition of her block, “Heart and Soul”: 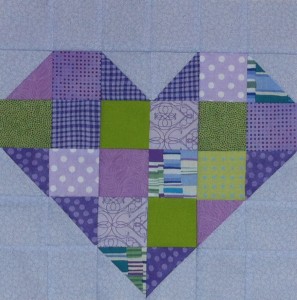 If you would like to make this block, here is the link to the pattern: http://auribuzz.files.wordpress.com/2013/03/heart-and-soul_.pdf, and if you want to be inspired while sewing it, here is the link to the music: http://www.youtube.com/watch?v=SwrYMWoqg5w. It never fails to amaze me how many uses there are for half-square triangles.  This is a very simple, but fun block.

Here are the first four blocks together: 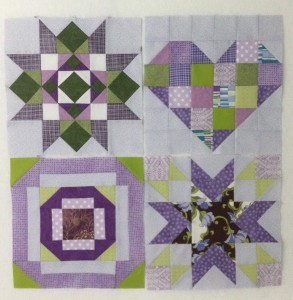 These blocks are so different in design, which makes this project fun and will produce an interesting quilt.

My next project was making a block for Leona (OneyGirl at Flickr) in the Quilt Around the World Bee. Leona asked us to make her a 12 inch block using modern Christmas themed fabrics. The block I chose for her is called “Folded Star.” It looks a little like a snowflake to me. Okay, a square snowflake. It has a few in-set seams but went together easily. I hope she will like it. 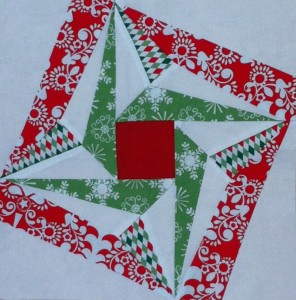 It’s nice to get these done, because I have a new project that just hit the table!

Hope all is well with you and your family,